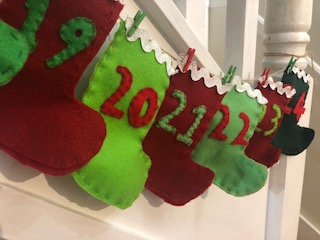 I’m really looking forward to my baby’s first Christmas and thinking of all sorts of ways I can make it special. I wanted to have a handmade keepsake of some sort that would hopefully be in our family for years, and I hit upon the idea of an advent calendar – consisting of little stockings, each numbered 1 to 24, that I can fill with all sorts of things year after year.

Given that I haven’t done any sewing in years and can’t think of any time I’ve ever sewed for fun, I found this surprisingly easy to make. It was a little time consuming but only because I don’t get a lot of free time as I have an eight month old baby, and would sew a couple of bits in the evening here and there, over the course of several weeks. If you have a sewing machine that would speed up the process as well. 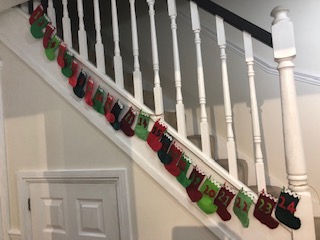 The design is my own – I know there are plenty of advent calendars like this out there but I didn’t copy any of them and just thought about how I wanted it to look: 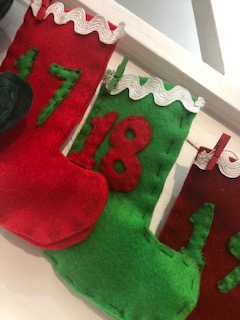 I’m really pleased with the way they turned out even though the stitching and numbers are slightly different on each; my husband says that just adds to the homemade effect and he thinks they will make a lovely Christmas keepsake.

My daughter will be nearly ten months old at Christmas so won’t understand advent calendars and I had considered just filling it with chocolates for us this year, but I saw a set of finger puppets on a site called Once Upon a Time that are designed for a baby’s advent calendar, at a very reasonable price, so I ordered them back in September. They were supposed to be with me by early November but with only a few days to go until the start of December they still haven’t arrived and the site owner hasn’t responded to my messages, so I’m hoping they will still come in time – she has a few days yet! [Edit – they didn’t come, and this site has since closed down – I ended up finding finger puppets on Amazon the following year and just using the stockings as decorations that first year!]

One thought on “Make your own felt Christmas stocking advent calendar”