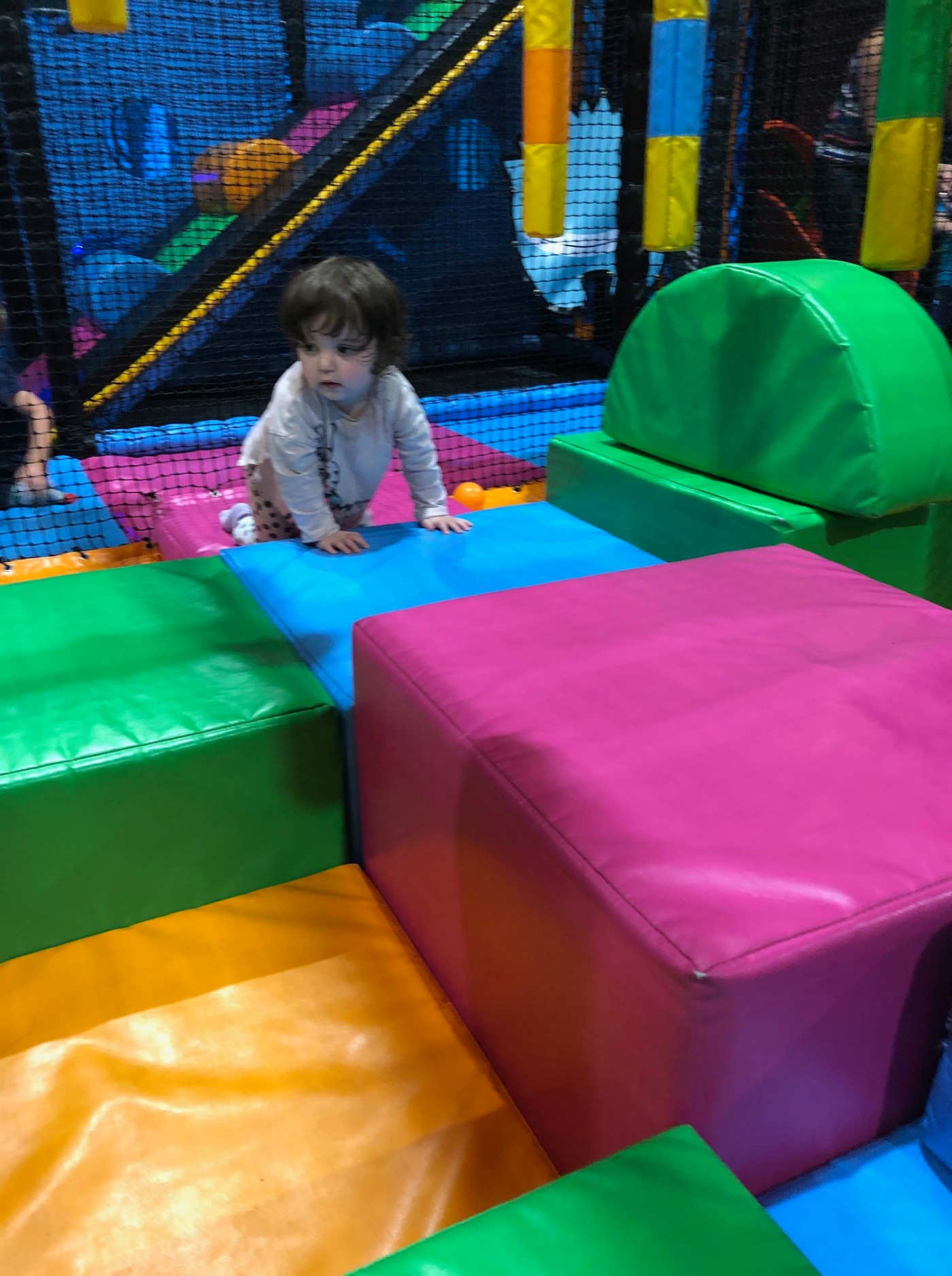 What’s it like at Sutton Sports Village and Trampoline Park soft play?

You’ve got to have a lot of energy to go to soft play – at least until your children are old enough to explore by themselves!

There are two types of soft play – a room where soft play equipment is set up temporarily, like a session at a leisure centre, or a dedicated soft play centre with permanent structures for climbing. I’ve been to both, and each has their merits – the latter is quite a bit more expensive, for one thing!

I’ve been to Sutton Sports Village twice – it only opened in 2018. The first time I went, baby S was only a baby and not even crawling, so we stayed in the under 2s area. It’s a small self-contained space with soft blocks to climb on, a couple of puzzles on the wall that have nobs to turn and shapes that drop – and that’s about it. It’s a fairly small area, and given the parents need to sit in there (or on the side) with their children, there’s not much room – but the mini moo seemed to enjoy herself. The larger soft play area is for 8 years and under, so going with a 19 month old who still prefers to crawl rather than walk, on a rainy Sunday afternoon, was a little daunting! Luckily while the café area was packed the place wasn’t quite as busy as I’d expected. The café is a decent size but not huge and given most children over the age of about 4 were in the soft play by themselves, the parents were sitting in and around the café area, which is why it looked so busy. I managed to find space to park my buggy against the wall – you should either take your valuables with you if you have a pocket or small bag you can manage while crawling around, or use the lockers provided (you need a £1 coin which you get back).

The main set up: two storeys of fun

The main part of the soft play is themed around a monster – you enter through his mouth. To be honest I didn’t get very far, since the mini moo wasn’t big enough to climb up the big steps or go down the tube slide on her own, and I’m scared of heights (it’s a two-storey structure, and the steps are so high, I had trouble getting up and down them while carrying a toddler) and was worrying about whether I would fit down the slide!

I’ve actually never been on anything like this as a child – I’m not sure soft play centres existed when I was a kid – and I think what mainly put me off was that I was there with the mini moo on my own, so had no-one to ask ‘where does that tunnel go’, ‘can I fit through there, is it suitable for a crawling baby’ etc. I think I remember seeing that the recommended age for the big structure is actually two and above, and while the mini moo wasn’t far off, I decided this might be something for a later date – perhaps when daddy comes with us as well!

Luckily, there were plenty of other things to keep us occupied and make us feel like it was worth the money. There’s a ‘glow room’ room which is basically a darkened room with a few coloured lights – I thought this was a bit poor to start with and that they could have made much more of it then I realised that actually it makes a great chill out room. If your child is getting a bit hyper from running around in the soft play, get them to come in here for a while to calm down!

We also used the under 2s area a couple of times during the 1.5 hours we were there – but our favourite part was the trampolines. There is a separate trampoline area for older children and adults, who either want to jump for fun or actually to proper trampolining skills, but the soft play area has its own trampoline section. There are about 8 small square trampolines which are enclosed on three sides by mesh walls, but open at the front – meaning you essentially get your own little trampoline ‘pod’. You can hop on and off – nobody seemed to be on one of these for a few minutes at a time, which meant there was always plenty of space to go and have a bounce. The trampoline part itself is the floor, so you just step on and off – perfect for children. Baby S loves to bounce and had a great time bouncing herself up and down on her knees, even standing up a few times, and playing with me on the trampoline.

Next to the trampoline area is a ball pond. It’s sunken into the floor and looked quite deep – my 19 month old couldn’t have climbed out without help, even though there are bolsters built in to some of the sides that you can use to either sit on or help you climb in or out. The sides are not that high but smooth and steep and baby S loved sliding down them into the balls! She kept getting me to sit her on the side, held out her hands to hold mine and laughed as she slid down. She liked playing in the ball pond – there’s a block in the middle that blows air and keeps balls suspended in the air, which she found fascinating. Some of the older children were a bit boisterous, playing with a rubber boat and pushing each other around in the ball pond and I had to grab baby S to stop her from being run over a few times – but on the whole she loved it.

Playing that much is tiring! We stopped after an hour for a drink and snack in the café. They have a wide range of food from pouches of fruit for babies to muffins to hot meals; I just had a drink while baby S had a snack and some water. There are high chairs provided and decent baby change facilities (as you might expect).

Access to all these parts of the soft play is £2.25 for 12 months or under, or £7.75 for 1-8 year olds. I think it is fairly good value for money if you can make use of all the facilities – you get a two hour session – but I think it’s a shame that the lower price is for babies aged under one. The dedicated baby area says its for under 2s and the main area is recommended for over 2s, and while there are still some things we could do, we paid the same rate as children who could use the whole playpark including climbing the main structure, which we couldn’t. Even so, we had fun and will definitely be going back!