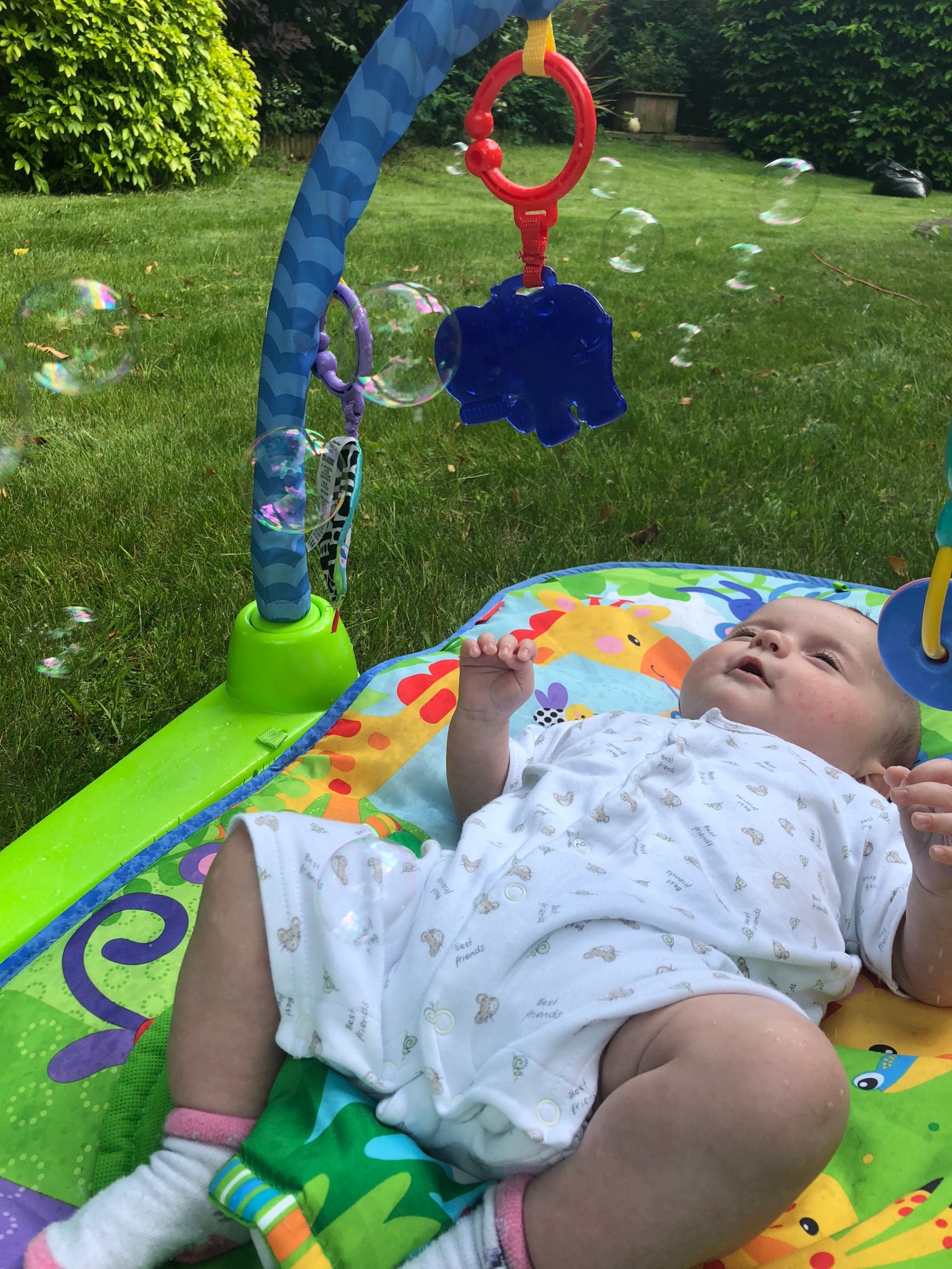 When they are very young, babies don’t really play with toys – or even pay that much attention to them initially. But at any age, toys are part of helping a baby develop. There are a few things that my daughter really liked while she was three months old (and beyond – I’m very delayed with my blogging so my daughter is now two!).

Most babies may be starting to clutch things when they are under three months but you can’t really give them a toy and expect them to play with it. Their attention spans are also limited but they are starting to understand cause and effect, i.e. that if they press a button a light will flash – my daughter seemed to be starting to appreciate this as she came up to four months.

You will likely be given or buy cuddly toys for your newborn, but while they are three months or less  most of them are best left on a shelf in the nursery as decoration. You can’t leave toys – even soft toys – in a cot or moses basket while your baby sleeps, and at under three months, my daughter had little to no interest in holding a soft toy, even a comforter. 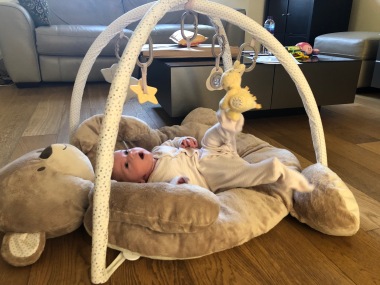 These go by either name; they consist of a padded mat (usually round) that the baby lays on, with curved bars over the top with toys hanging off. There are loads of different designs out there and different prices from about £15 to £50.

One of the real benefits of these is it gives you somewhere to put the baby. We have wooden floors and I was lucky enough that the Mini Moo didn’t cry when I left the room or cling to me, needing to be carried around all day in a sling like some do. If I wanted a drink, I could put her on the mat, go into the kitchen, and come back and sit down, keeping an eye on her but essentially leaving her to her own devices.

The toys that hang down from the playmat vary but all the ones I’ve seen have one key thing in common – a mirror right in the centre. This got my baby’s attention from very early on; I remember when she was two months old she loved to lay on her back and look in the mirror for what felt like ages, and as soon as she was big enough, would kick the other toys or hit them and watch them swing backwards and forwards.

We bought Mothercare’s Teddy Toy Box playmat, which at £50 wasn’t cheap, but we fell in love with the soft teddy that forms the base.

The padded sides are great to contain, I mean cushion, the baby, and you can use the teddy’s head as a support for tummy time. Its arms rattle and its feet make a crinkly noise but at three months my baby wasn’t particularly fussed about those elements.

I have heard that babies prefer bright bold colours so perhaps something like the Fisher Price rainforest gym would have been better, which has music, lights and sound, and costs about the same.

We had another play gym, a cheaper one we’d got second hand (that is, it was cheaper when new) that was pink with birds and hearts hanging from it, and again a mirror in the centre. I had this on the bedroom floor next to the moses basket which meant that if Mini Moo was awake but I was still getting dressed or wanted to go in the shower, I could lay her on that to amuse her for ten minutes or more – obviously at this point she wasn’t mobile and would stay exactly where I left her! 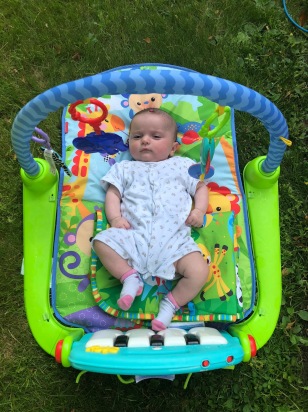 We also had a third play gym, as it was passed on by my sister, who I think got it in a charity shop in the first place. It’s not padded and only has a thin mat, so not great on our wooden floors – I put it on some foam squares (see below) inside, and sometimes used it out in the garden on the grass. There’s a bar over the top with a few simple toys hanging from it (which I think are less interesting than the ones on our other playmats); it does come with a mirror but that was missing from ours.

But the best thing about it is the piano at the end, with four large keys – each plays a note when pressed or kicked, which then launches into a little tune. At three months my baby was happy laying on her back kicking the keys and making them play tunes – when she is a little older I will turn her on her tummy and she can press the keys with her hands. The keyboard can either stand up (good for kicking) or lay flat (for when baby is on her tummy using her hands). 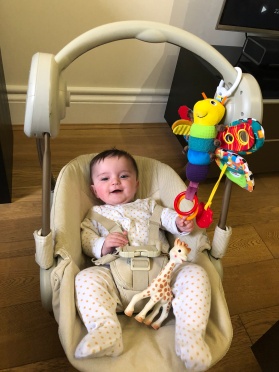 Less of a toy and more somewhere to put the baby down! We had a moses basket in the living room (as well as the one upstairs) for the Mini Moo to take day time naps, and I would sometimes put her down in there if I needed to go and fetch more nappies from our storage area in the garage. But I rapidly realised if she was awake, it was pretty boring just looking at the ceiling (can you get mobiles for moses baskets?) so instead she preferred to sit in her bouncy chair where she could see what was going on.

We had one similar to this one from Mamas and Papas (but an older model). We got it second hand from my sister, or rather third hand I think as she bought it second hand. As it was a bit old the motor went after about two and a half months, meaning the chair would still play music but the gentle vibration no longer worked.

We also found that by the time Mini Moo was approaching four months, she had grown out of the bar with dangling toys – they were great when she was two months old as these were easier to reach than the ones on her play gym, so these were the first toys she learnt to reach out and bat with her hands. But after a while we found we were taking the bar off to put her in the seat, and not bothering to put it back on, as she preferred to watch what was going on around her.

We had a cot mobile but didn’t get a huge amount of use out of it. It hadn’t occurred to me initially that baby S wouldn’t be in her cot until she was six months old – and it’s recommended that you don’t use cot mobiles once the child can sit up as they can reach for the mobile and potentially pull on it. 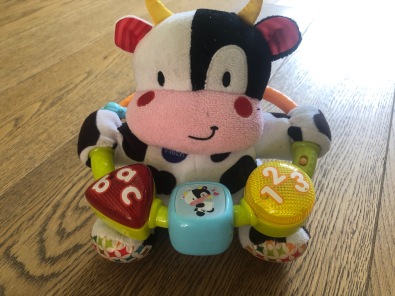 Or as we came to know it, “I’m a soft and happy cow”. This was the first toy my daughter genuinely loved. It’s a soft cow with two buttons which are big, rounded and easy to push and a spinner in the middle. It’s easy for little hands to grasp and plays various songs and phrases including ABC, 123, and a song beginning “I’m a soft and happy cow”. She played with it for months and it’s still in her toy box two years later, though of course it gets played with a lot less often now. But as far as electronic or musical toys go, I think this is one of the best.

I couldn’t end this piece without mentioning Lamaze. They have a huge range of baby items but are perhaps best known for their soft toys, which are created in conjunction with baby development experts. Each toy is an animal with different body parts to play with, like ears that crinkle, a nose that beeps, a bell that rings, a mirror on its wings and so on. They can hang from a buggy or crib and are great for babies to explore sounds, textures and ideas like putting something in a pocket. We had a few different ones (see bouncy chair picture above), and also some similar toys that weren’t Lamaze – baby S was particularly fond of a monkey with long arms and legs who we called ‘dangly monkey’. You can almost always pick up Lamaze toys in charity shops or at second hand sales as well and they make a great gift for a new baby.

Have I missed anything out? Let me know what your child’s favourite toys are/were when they were around three months old in the comments below!