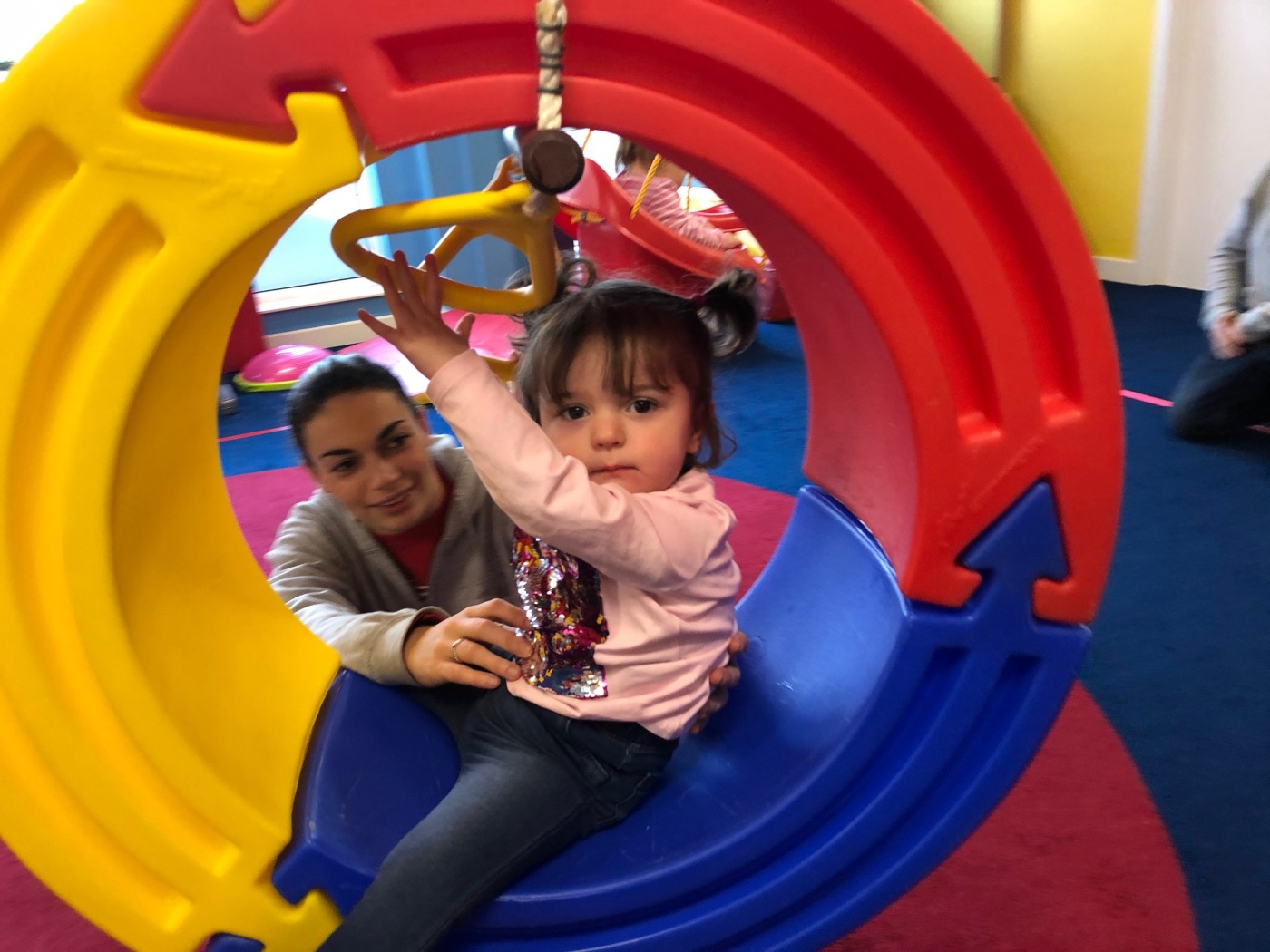 A gym for babies – what do they do, lay on a mat while mummy bench presses some weights? Or crawl around during an aerobics class?

I was a bit confused when I saw My Gym come up on local listings of activities for children, as it said they had classes from six weeks old and I couldn’t imagine what they could possibly do there!

Then one day I was walking down my local town high street and spotted a sign for My Gym and went in to have a look. I was given a warm welcome, an offer of a free trial class and once we did that, it was so good that I signed up on the spot.

My Gym is an American company with children’s fitness centres all over the US; they are actually in more than 30 other countries as well but I’d never heard of them before. There were only three locations in the UK when we started – Billericay in Essex, Crouch End in north London and Wallington in Surrey. Since then, Battersea and Richmond have opened.

My Gym offers classes for different age groups where everything is completely age-appropriate and very cleverly thought through. Their classes go all the way from 6 weeks to 13 years and no doubt are doing their bit to help combat the child obesity problem in the UK.

But for the youngest babies, it’s not about keeping fit, but instead developing skills and muscles and giving them new experiences they wouldn’t get elsewhere. At My Gym my little girl had her first go on a swing before she was even three months old (she was quite nonplussed the first few times, but quickly came to love them – and the Little Tykes swings they use are much better for smaller children than the ones in our local park), has swung from monkey bars (being held by one of the gym staff of course!), done a back flip (again, with help!), balanced on a beam and twirled around in an aerial silk like you see at the circus!

We absolutely love My Gym – my daughter has been going since she was 10 weeks old, and she’s now two and a half. In fact we held her second birthday party at My Gym which will be the subject of a separate post! I can’t say enough good things about My Gym or the staff who are all brilliant – my daughter lights up when she sees where we are going and she loves to run around and explore the gym (sometimes when she is supposed to be sitting still, but normally she’s very good!).

Each week the activities are different and the programme is really well thought through. We started in Little Bundles, which is 6 weeks to 6 months. One of the reasons I liked the class initially was that I had no idea what to do to entertain a baby before she was able to do much for herself – other than wave toys at her and try to encourage her to reach for them. At My Gym, from the start we were practicing thumb grips – where you get the baby to grip each of your thumbs with their hands, and then you can help them do a little sit-up for instance – or get them used to going upside down.

So far the classes we have done are Little Bundles (up to 6 months), Tiny Tykes, Waddlers, and now Gymsters. Most of the classes at weekends combine age groups e.g. Tiny Tykes and Waddlers, or Waddlers and Gymsters, which means Sophie gets to mix with a slightly different age range, and can move up to the next stage when she is ready.

Each of the classes we have done starts with Circle Time – starting with singing the welcome song. Even at an early age Sophie respondsed very happily to the song and claps her hands along by herself which I loved, and now she can sing a lot of the words! Then we go around the circle and each parent introduces their child (or the child says their own name if they are old enough) and the teacher welcomes them by name. At the moment in Waddlers/Gymsters, this is then followed by a warm-up that involves stretching various limbs, identifying body parts and doing a fun backwards rock while sitting on the parent’s lap. Sophie has been doing this for a while so knows the drill, as it were, and usually does some of the actions unprompted.

Then there is a practice skill, which the teacher asks one child to help demonstrate. That could be anything from a sit-up to a forward roll to a back flip. The teachers (there are two in every class) come around the circle and help parents as sometimes you have to hold your child in a certain way (the backflip took me a couple of times to get the hang of – but Sophie loves it and comes up grinning). After that, there’s a song with actions, and a dance (basically another song with actions but standing up and often moving around in a circle).

After circle time there’s an invitation from the teacher to go off and explore the gym – while they set up the ‘adventure’ and the gymnastic for that session. So we have a few minutes where Sophie can go off and play in the ball pond or on a trampoline, or walk along a plank, climb some steps and go down a slide – there’s so much to do, and the gym set up is different every week and so you never know what your child will make a bee-line for this time. It’s also a chance to say hello to the other parents for a few minutes as there are some I have become quite friendly with as we see the same people most weeks.

The ’adventure’ is always a fun surprise. The children might be walking along planks that have been raised at an angle, or putting balls through coloured hoops, or driving little cars around obstacles while the bubble machine fills the air with bubbles. There’s always a skill that’s being reinforced, but it’s also a lot of fun.

Then comes the gymnastics, and there are usually two activities to try with a ‘big deal’ as well. The activities might be learning to jump on a hopscotch, swinging from the parallel bars, doing a forward roll or balancing on a beam. The ‘big deal’ is sometimes sitting on a car and riding down a slide into a pile of mats, or being pulled around the floor on a snow dish, or even a go on the zip line – for young children, they attach a seat and hold the child in place!

The rest of the time at My Gym is filled with different activities like a game and a puppet show with a story or song- and if you are very lucky, Mymo the My Gym mascot might appear and play ‘What’s the time, Mymo?’- which is like ‘What’s the time Mr. Wolf’ only with one of the staff in a monkey costume! Then it’s time to go and the goodbye song, and ‘socks and shoes and stamperoos’ (an animal stamp on the back of the child’s hand to show they have been to the class).

In the class for the youngest babies, which seems a long time ago now, there was also a section where the babies would lay on a mat in a sensory area and play with different toys as the My Gym teacher led a discussion on a different topic, such as sleeping. It was a really good chance to chat to other parents and share experiences, and as a first time mum I found it quite reassuring.

We really missed My Gym when it was closed during lockdown and were very happy that they have been able to re-open. Things are a little different of course, but the changes have been made so seamlessly and incorporated into the classes that I don’t think my daughter has noticed any difference. There’s good social distancing in place, hand sanitiser, regular cleaning, and the way the activities have been adapted is very good – we still get to do all the things we love. Sometimes an exercise now needs parental help rather than the teacher, if it involves one-on-one contact with the child, and they get divided into two groups and rotate around different exercises and activities a bit like in a circuits class. And instead of ‘stamperoos’ at the end, it’s hand sanitiser and a sticker!

I often see parents wondering what classes or baby groups they can take their child to at the weekend as most things happen during the week. My Gym has several classes for different ages at the weekend so I’m glad we were able to continue coming once I had finished maternity leave. It is definitely one of my daughter’s favourite things to do!