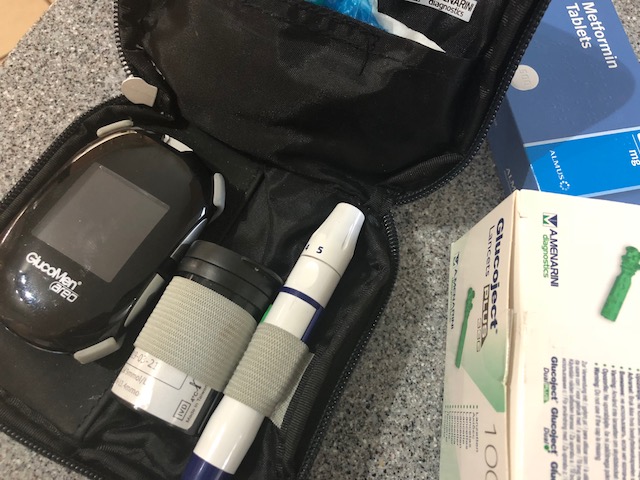 The following is my experience, in the hope that it might be useful to someone, rather than expert advice – I’ve provided some links at the end where you can get more information.

What is gestational diabetes?

Gestational diabetes – or GD – is a type of diabetes where your body doesn’t efficiently produce or use insulin, meaning you suffer from high blood sugar – that only affects pregnant women. It is thought to be caused by hormones in the placenta, so isn’t caused by lifestyle or eating habits. Many women who are fit, slim and healthy get GD in pregnancy – I’ve seen stats saying as many as one in 10 women get GD when pregnant – and it usually goes away after you’ve given birth, though it can sometimes turn into type 2 diabetes.

What are the risks of gestational diabetes?

According to the NHS, gestational diabetes can cause problems like larger babies or too much amniotic fluid in the womb (both meaning a potentially more difficult delivery), premature birth, pre-eclampsia, jaundice in the baby, and stillbirth is rare but is also a risk. So it’s something to be taken seriously.

One thing to note is that your baby will not be born with diabetes – it doesn’t work like that. However, they do have a higher chance than average of developing diabetes later in life.

If you have GD you are likely to be booked in for additional growth scans – I had them at 28, 32 and 36 weeks. At the 28 week scan the size of the baby was on the 87th percentile which was a bit worrying as I wasn’t looking forward to labour anyway, then on the second scan, she was at the 95th percentile. The hospital decided they would induce early at 38+4 (meaning 38 weeks and 4 days) so still full term, but they thought if I went to 40 weeks the baby could be quite large and be at more risk of shoulder dystocia which is basically where they get stuck coming out.

Then at the 36 week scan the baby’s size had reduced to the 54th percentile which I naively thought was a good thing – but the fact that she had dropped down so much was actually a concern to the hospital and they thought the placenta may have stopped working so efficiently. They decided to bring the induction forwards to 37+4 and got me to come in twice before that for monitoring, though they didn’t find anything wrong.

In the end the induction didn’t work (a story for another post perhaps) so it was 38+1 by the time my daughter was born by caesarean section at a very healthy 7 lb.

She had jaundice after she was born but only a mild case which didn’t need treatment, that went away by itself after she began feeding properly.

When are you tested for gestational diabetes?

GD usually presents itself in the third trimester so most women are tested at 28 weeks, unless they have had GD in a previous pregnancy, in which case they may be tested earlier. It varies by area I believe, but in my case, I was tested at 28 weeks because of certain risk factors – my age and weight. Other risk factors include if there is a history of diabetes (type 1 or 2) in your family. However, as anyone can get GD, there is a strong case to be argued for testing all pregnant women, as GD is much more dangerous if left undiagnosed and untreated.

What happens during the test?

I was given a diet sheet to follow for three days before my test, which was essentially low sugar and high protein with a fair amount of complex carbs. I could choose what I ate from the suggestions but it asked me to have a certain number of portions of carbs (I think it was 6) – which surprisingly included rich tea biscuits, so I ate quite a few of those!

I had to fast overnight before the test and not eat anything or drink anything other than water for breakfast; the test itself was at 8am. I had a simple blood test with a needle in my arm, which didn’t really hurt, then went and sat in a small waiting room for two hours before being given a sugary drink and having another blood test. I remember that Jeremy Kyle was on the TV in the waiting room and I had taken a book to read, but ended up falling asleep – I suffered with extreme tiredness for a large part of my pregnancy that led to me falling asleep in all sorts of places, including my desk at work!

The sugary drink was fine – I’d heard it compared to both Lucozade and squash and it was probably more like the latter in my opinion, and I didn’t even think it tasted overly sweet, though I did wonder if that was a bad sign! You don’t have to down the drink, but you do have to drink it fairly quickly, in a few minutes ideally.

I was told I would get a phone call within 48 hours if I had GD, and if I didn’t hear anything then the results were fine. 48 hours was Friday morning so when I hadn’t heard anything by the end of the day on Friday, I breathed a huge sigh of relief. Then on Monday evening when I was on the train home from work I had a missed call from the hospital, but they left no voicemail. It was too late to call back that day so I called on Tuesday, but given I didn’t know who had called or why, I explained to one midwife who said she would try to find out and someone would come back to me. By Wednesday morning I still hadn’t heard anything and got the same response, though was told that it might be about the results of a blood test for antibodies but that I would have to wait for a call about that.

By Wednesday afternoon I was getting impatient so I called back and asked to speak to someone about my antibodies result; I got hold of a midwife eventually who gave me the results, which were the same as the previous test I’d had so no drama there, but then she casually remarked ‘oh and I see from your notes you have gestational diabetes as well?’

That was very unwelcome news to me, and I was pretty annoyed that I was supposed to have been told within 48 hours and this was now more than a week after I’d had the test – and I felt that I’d only found out because I’d phoned the hos

I had an appointment for a scan a few days later so was able to see the diabetes midwife then. She gave me a testing kit and explained what I needed to do, and I was given very generalised dietary advice and told that from now on, all my midwife appointments would be at the diabetes clinic at the hospital. At a later appointment I expressed surprise at how little dietary advice I’d been given as I heard some people in other parts of the country (via a Facebook group I joined) had either individual or group sessions with a nutritionist, which I was told my area didn’t do – though when I asked, the doctor said all they had was the pamphlet I had already been given, though I hadn’t been given it and they had to go and find me one!

What’s the treatment for gestational diabetes?

Types of treatment vary – you will most likely start off attempting to control the GD through diet, cutting out sugar and simple carbs – I’ll write another post about what I ate later. If that doesn’t work, you may be put on metformin, which helps your body handle insulin it produces. And if that doesn’t work then there is insulin itself – but injecting it is practically painless. You have what looks like a pen with a tiny needle only a few milimeters long (which you change for a fresh one each time) and jab it in your leg – I honestly barely noticed I was doing it, but that might have been because I was injecting fragmin as well (a topic for another post), which was more painful.

I was asked to test my blood sugar first thing in the morning then after breakfast, lunch and dinner which involves a finger prick test – painful the first time I did it then it became so routine it was no big deal after that. You are given a book to fill in your readings with a target range; if I went outside the range three times in a row I had to ring the midwife, who sometimes then adjusted my medication over the phone (incidentally – NHS prescriptions are free when you are pregnant and for a year afterwards).

I was on metformin for a while, then both metformin and insulin, then just insulin – by the end I was on 12 units in one injection before bed every day. My overnight fasting levels never got under control – weirdly, when I had the test, it was my fasting level that was a bit high and after the sugary drink they were fine. For the rest of my pregnancy I followed a GD-friendly diet and my post-meal levels were fine, but my fasting levels – the reading first thing in the morning – never got to within the target. But I had a healthy and happy baby who is thriving.

What about once you’ve had the baby?

As I said, GD goes once you’ve had the baby – though you are at risk of developing type 2 diabetes as a direct result. So you need to be tested afterwards, at either 6 or 12 weeks, then every year after that.

The 6 week test is the same glucose tolerance test involving a blood test, a sugary drink, a two hour wait and another blood test. You may be breast feeding and have your baby in the waiting room with you which is why some people prefer the other type of test, but depending on your area you may not have the choice. My area actually does the 12 week test.

The 12 week test is the HbA1c, a single blood test that checks your average blood sugar level over the previous three months. What you’ve eaten won’t make any difference as it’s still about how your body produces and uses insulin. This is the test I had, and thankfully the result was fine.

Where can I get more information?

The NHS website would be my first port of call: https://www.nhs.uk/conditions/gestational-diabetes/

There is also information about gestational diabetes on Diabetes UK, though I found the diet advice for GD or rather what I could tolerate to stay within the range much stricter than for ‘ordinary’ diabetics. https://www.diabetes.org.uk/

I also found a really useful website called Gestational Diabetes UK, run by a lady who had GD in pregnancy and couldn’t find much info or advice, so started her own site, which has been really successful. It has recipes which I’ve found very useful (you have to pay a subscription fee of £7 a month to get most of them) and there’s also a linked Facebook group which was a lifeline for me to ask GD-related questions.